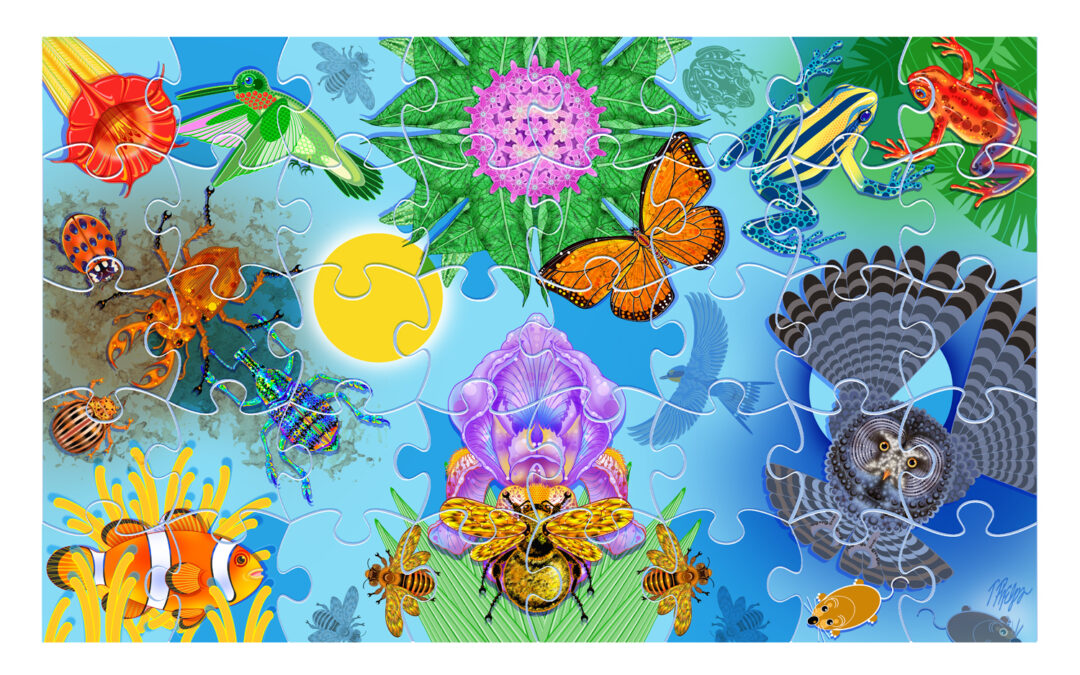 We must cultivate an awareness and understanding for the importance of Biodiversity Connectivity; humankind depends on it. Nature and man are seamlessly connected through action and reaction, cause and effect. By recognizing, embracing and conserving nature’s intertwined circles of life all tied to water, land and sky, humankind can create reciprocal circular ripples that can have a profound effect on the meaning and gift of life on our earth. For biodiversity success the puzzle pieces must fall in place and stay together. From top left to lower right, here is a summary of a few impactful drivers of Biodiversity Connectivity.

Birds embody the majesty of flight with hollow bones and feathers. Hummingbirds’ Figure of 8 forward and backward flight mechanics inspired drone development through BIOMIMETICS the science of mimicking nature’s actions, reactions, and forms into manmade products. In a symbiotic relationship beneficial to both plant and animal, while drinking nectar, pollen can be collected on the hummingbird’s head and neck and transported to the next open bloom making it an unsuspected and important pollinator.

Beetles are the most successful insects on earth for over 270 million years with over 360,000 named species. As detritivores they renew the soil sustaining plant life. Beetles breakdown dead animal matter and clean skeletal materials down to the bone. As construction workers they aerate the soil, dig tunnels in the earth that provide plant roots with clear pathways and, they fertilize the soil with their droppings. Finally, beetles feast on parasites and even carry pollen to plants on their terrestrial travels.

Clownfish and sea anemones have a MUTUALISTIC association that benefits each other. The stinging tentacles of the sea anemone provide protection to the toxin-immune clownfish from its predators and the clownfish removes parasites from the anemone and provides nitrogen nourishment.

Migrating monarch butterflies need milkweed plants to supply the nourishment necessary for their long North American journeys back and forth to Mexico. Cultivating native and natural gardens in urban settings can substitute for ever-declining and disappearing prairies and grasslands.

One of nature’s pollination adaptations for success is the general arrangement of the iris flower. Three petals stand upright and are thus called standards; three sepals flowing outward are called falls and are equipped with Mr. T-like mohawk tufts or “beards” of short upright projections for insects to grab a hold of (sort of like Velcro) and steady themselves before entering the flower for its nectar. Insects, like bees, will bumble inward to the pollen-covered stamen, knocking off and collecting the dust in their fur and on their specialized legs.

There is a worldwide decline of amphibians due to viruses, fungus, and habitat loss. One of the most widespread diseases is caused by Chytrid fungus found in moist environments, infecting many amphibian species. This infection is leading to population declines and extinctions in Africa, Australia, the Caribbean, portions of Europe and the Americas including central, south and the western portion of the US. A frog’s thin skin can absorb toxins found in their habitat, either from water or land, so they are important bio-indicators. When their numbers dwindle, it tells us that something is seriously wrong in our world.

While Predator and Prey relationships structure balanced ecosystems this could also be an evolutionary adaptive tale about the one that got away to live another day to pass along genetic material along the way to the next generation. This image is available and you will find many more visual stories on my website with over 1100 nature inspired images and please read my blog to learn about nature and my inspirations from it.