The Emergence of Brood X 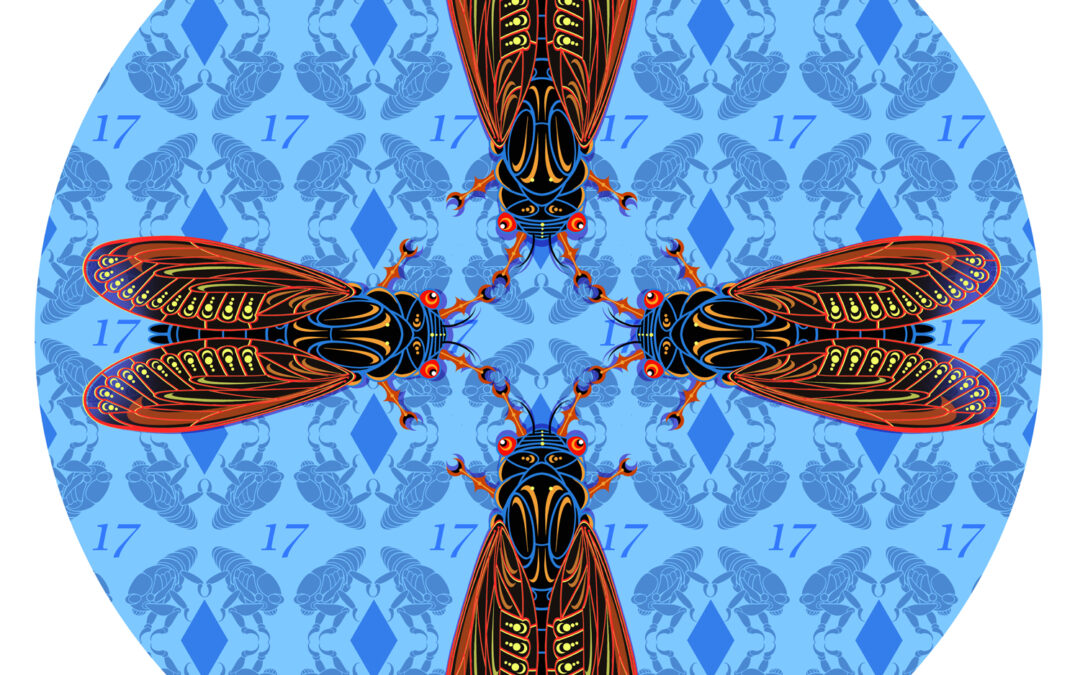 For the last 4 years on Saturdays I have walked (about 6 miles to and fro) to Lake Roland here in Baltimore with my longtime buddy Ralph Hruban, Director of Pathology at Johns Hopkins. He and I met in 1986 at the hospital campus athletic center playing basketball, a tradition we carried on early mornings every Monday, Wednesday and Friday for probably 10 years. His dry wit and kind manner appealed to me immediately and he never fouled too hard when trying to stop my skyhook. Our association led to co-authorship on a book: Surgical Pathology Dissection An Illustrated Guide (Springer 1995) that included my 50 pen and ink plates and a color cover. Our book won a few awards and I have continued working with Ralph on other research papers since.

On our Saturday morning nature jaunts with his dog, Junie, and, often two of his neighbors, Jon and Fred, we head to Lake Roland under the guise of seeking what nature has to offer and it often offers a lot. We have seen fox, kingfishers, great blue and black crowned night herons, eagles, hawks, turtles, geese, and ducks. A few of our sightings have added to my growing library of art assets for nature mandalas. Topical talk trends on politics, movies and books with multiple sprinklings of sarcasm and funny jokes.

Today was the emergence of Brood X of the 17-year red-eyed cicadas for the Mid Atlantic. We found them in all phases: castoff crispy carapaces, crawling bright orange nymphs, white bodied, white winged and red-eyed new emergents, and full adults all scattered on the ground and on tree trunks. And this is only the beginning.

From my book: Nature Mandalas Wonders of the Garden (Schiffer Publishing 2016) We know the cicada by its summer song. The female cicada may find the song of the male cicada romantic but, to humans, its loud timbre high in the timber may cut through our senses like an electric buzz saw. Vibrating at 600 times a second, internal muscles expand and contract resonating the mating call through a thinly walled abdominal chamber for all females to hear. Calling all females, the boys of summer have arrived!

Except for some varieties with strikingly shiny red eyes, most cicadas are camouflage colored to match the bark and foliage of their bushy and leafy environments. Egg-shaped compound conspicuous eyes, each paired with two or three additional small eyes or ocelli, rest on top of the cicada’s head. Its large frontal facial plate looks like the bowed grille of a Buick automobile. It has two large forewings and two tiny back wings, each transparent and looking like wrinkled iridescent cellophane. At rest, the wings lay parallel to the body and can clamp in place within grooves found along the thorax. While feeding and sucking on stems and foliage, cicadas expel a sugary protein-rich fluid that can attract and feed ants and flies. It is the most abundant herbivore in forest habitats with a biomass that can exceed 1 million individuals per acre. That is a lot of bugs making a lot of noise, and, being distributed worldwide, that is A LOT of noise!

The image above emerged for me after this Saturday’s trip to the woods. It is the most recent of 14 cicada mandalas I have created over the past 8 years. You will find many more fascinating organisms in my shop. Please visit again, many mandalas  materialize often. Wander with wonder in nature with friends and family whenever possible. It is good for the soul.