The Tale of the Animal Acrobats 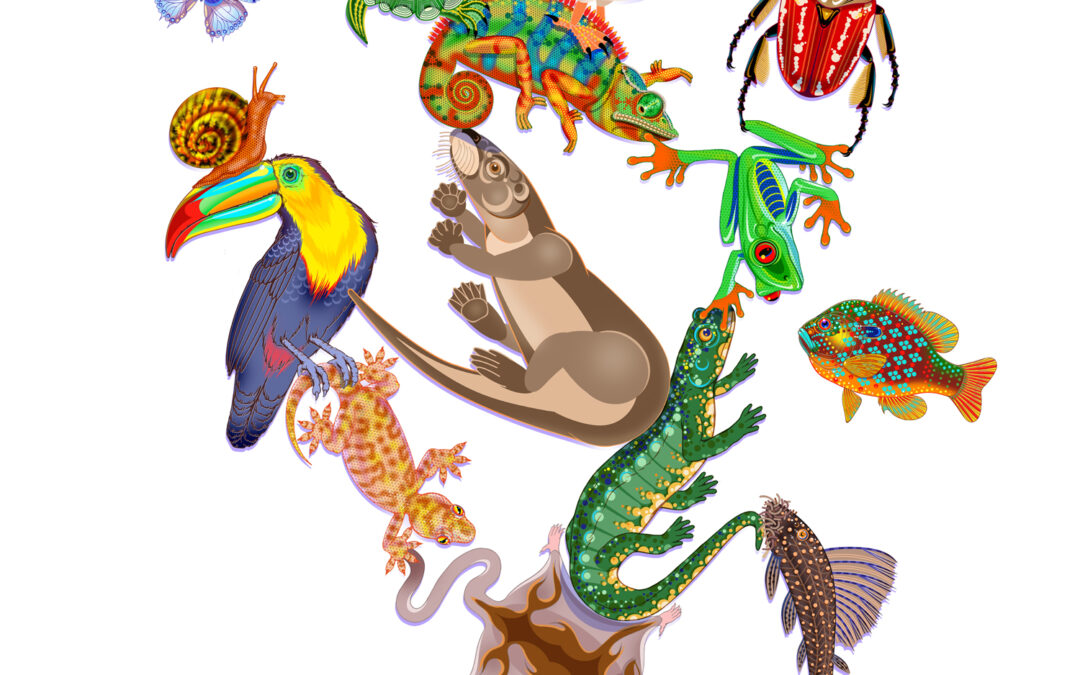 What is this? A very ornate box turtle with a strong and sturdy shell is shouldering all of the weight of some amazing animal acrobats. Perched on its back is a cute brown and white saw-whet owl watching the balancing act above. A sugar glider with bulging blue eyes balances with just one hand on the head of the owl while cradling in its wing flap a green and yellow spotted salamander whose tail is being sucked on by a brown spotted plecostomus suckermouth catfish with bristly whiskers. Holding onto the tail of the sugar glider is a brown reticulated gecko whose own tail has been grabbed by a purple toucan with a bright yellow chest. On its beak is an orange snail with a tie-dye shell watching the world go by. On the salamander’s back rocks a brown furry river otter that is balancing a green and red blue striped panther chameleon on its nose. A red-eyed green tree frog has planted its orange hand on the nose of the salamander and its orange foot on the chin of the chameleon. Balancing on the frog’s curled leg is a red and brown goliath beetle holding a light brown spiny porcupine fish with its two front legs. It sure seems kinda dangerous. Now wait—there is a blue feathered Atlantic puffin straddling the back of the chameleon while a green grasshopper has a back leg on the puffin’s shoulder and a front leg on the nose of a red-eared green slider turtle also stepping on the back of the red chameleon. The chameleon looks very nervous. A little brown bat with hot rod flames on its vigorously flapping wings is trying to steady the green slider turtle. A teal colored kingfisher with a cool punk hairdo is perched on the nose of the puffin. A blue and white butterfly and an orange and brown tiger moth have all come over to see what is going on. Now this is just crazy, I do not know in what world a bluegill can drop in to see what is going on out of water and without wings.

I encourage you to wander with wonder in nature and mostly have fun! Perhaps this tale and my artwork has brought you a smile. You can find prints of The Animal Acrobats in my shop and many other images of nature and whimsy. Thank you for your interest and support. I send my best!